Map to reading about China (读中国新闻的地址）

So, I’m thinking that what these posts lack is focus. Starting this week, I’ll offer unique and informed viewpoints on things I’m passionate about. Of course, there will still be the occasional random poem thrown in. And concert photos. But things are getting a little more topical around here.

This first series of posts will be on a long-time favorite of mine: Chinese contemporary culture. I begin tonight with an introduction to alternative and/or reliable Sinophilic news sources*. Later posts will include: my recent experiences searching for Chinese music and literature; an Internet resource guide for those who wish to learn Mandarin; a wrap-up coverage for China’s recent dissident crackdown thusfar; and reflections on why I continue to study this language and still be so interested in the country and its people. 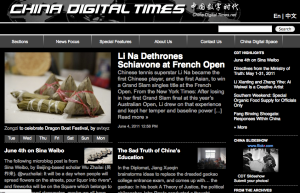 A bilingual publication with an impressive archive of stories, with coverage topics including: human rights, environmental issues, the 2008 Beijing Olympics, and China’s fast-evolving digital information culture.  CDT is a self-proclaimed “experiment in participatory media” whose content that travels well via Twitter, Facebook, Flickr, etc. While perhaps not the most established/authoritative source, this is a great first stop for translation, story aggregation, and sociopolitical analysis.

highlights: controversial content; This site tries to translate the surrounding tenor, not just the article.

CMP is a project based out of the Journalism and Media Studies Center at University of Hong Kong. The goal here is in-depth analysis on politics and media use in China, backed by strong scholarship and historical context. Content ranges from summaries of articles written by influential Chinese thinkers, to an interactive media coverage map, to self-produced books on journalism in China.

highlight: CMP is a great resource for anyone interested in Sino-current events, or meta-media coverage — or both.

The Global Voices media network does for China what it does for many countries — bring the efforts of citizen bloggers + journalists to a larger forum. They’re also a good starting point for finding other news sources, because their contributing authors all have interesting bodies of work besides GV.

highlights: links to other sources; translations and original Chinese texts are included together in all posts.

Covers everything from book reviews to projects and activism.What I like best is the emphasis on how the West covers East in its media: While the State-run Chinese apparatus is obviously biased, even respectable international news orgs can skew a story when they’re culturally ill-informed. ChinaGeeks, in my experience as a reader, turns critical eye to all angles of the issue at hand.

The site’s creator, C.Custer, is very active and effective on Twitter, boosting the site’s profile as a leader in the 英语／汉语 non-mainstream news provider ecosystem [small as that is].

Once I started this post, I realized there are so, so many other sources I want to include here (honorable mentions: Shanghaiist, James Fallows blog at The Atlantic, and the Mandarin-language IM/microblog/news hybrid QQ, kind of like a Chinese Yahoo!).

*This post is in honor of all those who lost their lives on 六四, whose stories aren’t known due to lack of information freedom.

One thought on “Map to reading about China (读中国新闻的地址）”